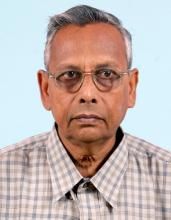 Areas of his research interest include physiology of flowering & fruiting in horticultural crops, mechanism of vigor-regulation in mango, and, physiological basis of water and high temperature stress tolerance in vegetables crops. He obtained training abroad in ‘Methodology in Plant hormones’ at the United States Department of Agriculture (USDA), Beltsville, in 1985, and, in `Isotopes in agriculture’ at the Nuclear Research Laboratory, IARI, New Delhi, in 1972. He received the ICAR Gold Medal for highest grade point average in Ph.D. Programme at IARI New Delhi. He also received the ICAR Senior Merit Fellowship during his Ph.D. at IARI.

He was Advisory Committee Member, Ph.D. / M.Sc. students, Division of Crop Physiology / Horticulture at U.A.S., Bangalore. He was recognized faculty at University of Agricultural Sciences, Bangalore, for teaching post-graduate courses.

He has been Editor, Indian Journal of Plant Physiology; Editor, Journal of Indian Potato Association, and, Life Member, Society for Promotion of Horticulture, having also held the portfolio of Treasurer of this Society.